Disclaimer: As always, a Veterinarian should be consulted whenever your dog experiences an injury. This article should be viewed as information-based rather than advice.

There are a number of ways a dog can end up with a bleeding toenail. The most common way this can happen is when a dog is having its nails trimmed and the nail gets “quicked”, meaning the nail is cut too close to the blood supply (the pink part inside a dog’s toenail). This can then cause the nail to bleed.

Additionally, another common cause of dog toenail bleeding is from injury to the nail itself, either from getting caught on something, breaking or cracking.

Dog nail bleeding itself is not painful, but whatever happened to cause the bleeding can cause extreme pain, especially if the bleeding is caused by injury or other damage to the toenail.

How to Stop a Dog’s Nail From Bleeding

If the bleeding is severe or you are uncertain as to how to deal with it, make sure your consult a veterinarian.

Depending on the cause, there are different ways to stop a dog’s toenail from bleeding. If the problem has been caused by “quicking” with nail trimming too short, applying a little Kwik-Stop Powder to the cut surface of the nail can serve to cauterize it to stem the bleeding. 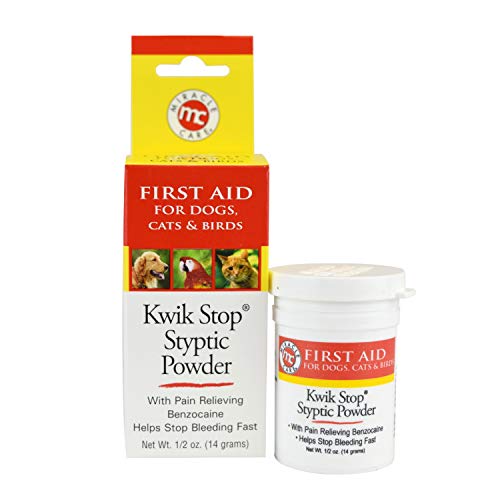 Kwik-Stop can sometimes sting a little, but it is one of the better ways to stop a bleeding nail and keep it stopped, and most likely the method your veterinarian would use to stop the bleeding, too. If there is no Kwik-Stop handy, cornstarch can work as well, if the bleeding is not too bad, by encouraging clotting.

If the bleeding is heavy, or is caused by a broken or cracked toenail, or even a toenail that is hanging off or one that has been completely pulled off, this is usually a job for the veterinarian since the exposed nail pulp will continue bleeding for a long time.

Additionally, these types of nail injuries are very, very painful, sometimes even more painful than if the dog had actually broken his toe, so this all needs to be remedied.

If there is bleeding due a broken toenail, or infection from a break that was not discovered right away, the dog should go to the vet to have this taken care of.

Any broken nails will be repaired if possible, by clipping away the broken part, stopping the bleeding, then applying a protective bandage that will need to stay dry and in place for a few days.

A broken nail that is hanging off will typically be plucked the rest of the way off (under sedation if necessary), at which point any exposed nail pulp will be covered in a protective bandage.

If Dog’s Nail Needs to be Removed

In the case of having to remove the nail, bandages need to stay on for at least a week or two, sometimes longer, in order to give the sensitive quick a chance to toughen up a little bit so the dog can walk without pain. In these cases, keeping bandages clean and dry is critical since a wet bandage will likely cause an infection and prevent the nail bed from healing.

Toenails that end up being removed because they are broken, or have been partially pulled off sometimes grow back if there is no permanent damage to the nail bed, though sometimes they do not. This is nothing to worry about, though; a dog will be perfectly fine even if he is missing a toenail.

Pain medication is usually prescribed for a few days and sometimes, depending on the severity of the damage, oral antibiotics may be prescribed by your vet to prevent any infection from starting.

Any toenails that are infected for whatever reason will be treated accordingly and either cleaned, repaired, and protected by a bandage or removed, with the foot then being protected with a bandage until the pulp can begin to toughen up. In the case of infection, oral antibiotics and pain medication are usually prescribed.

The best way to prevent the most common causes of dog toenail bleeding is to keep a dog’s nails properly trimmed all the time, and to make sure that nail trimming is done with a sharp, pliers-style nail clipper.

By keeping nails short, this will help to prevent accidents where toenails become caught or get twisted, and are either pulled off or get broken. This is not only very painful, but can invite infection. Equally, the person who is doing the nail trimming should know how to trim correctly so that it can be done without causing any bleeding from cutting the nail too close to the blood supply.

Dog Toenail Bleeding – Your Vet to the Rescue

As you can see, your best advice on how to stop a dog s nail from bleeding will come from your own vet. But there is much that you can do to try to avoid the problem in the first place.

As a rule of thumb and in most cases, properly trimmed dog toenails are short enough that they do not usually click on the floor; so when you start to hear that clicking, it’s time to get the nail trimmers out.

By keeping a dog’s toenails short enough this will prevent dog toenail bleeding and injury, and ensure healthy and happy paws in general.

For some tips on how to clip your dog’s nails, click here.
Or
For pointers on choosing the right dog nail clippers, click here.